Welp, I know it’s been a couple (okay three) weeks since I have written but that folks is just part of the charm of living in Kitti versus Kolonia. It also goes hand in hand with having no water for two days and showering in a skirt in the middle of the jungle with nothing but the moonlight (okay, and a small flashlight) which was both therapeutic and enthralling. Similarly, two weeks ago after hours of lesson planning Scott and I went out and saw the most incredible sky I have ever experienced. The stars were so bright and Milky Way so vivid it was terrifying; it felt like the universe might actually suck us up. We walked out to a dark road and laid in the middle of the street just staring. One of the things I thought about was how hard it is to believe that Scott and I have now been living as one with nature for a whole month. Time is ironically moving fast on an island that is always late.
School is wonderfully exhausting. I never anticipated loving teaching so much, and I also never expected to be so tired at the end of each day. My gratitude and respect for my previous teachers is continually swelling. Honestly, it’s not entirely the teaching I love so much, but the relationships I am forming with my students while teaching. Don’t be mistaken, I cannot explain the elation I feel when they really understand a lesson- but rather its more about the journey with them to get to that point of clarity that I am enjoying. I love my students, even when they talk too much they are always keeping me laughing, are helpful and understanding and most of them are eager to learn. They are some of the sweetest kids you will ever meet. For instance, I thought my birthday last week would be a little lonely and overlooked since I am in a foreign land. False. It was the most acknowledged birthday I have ever had. My kids brought me coconuts, mangoes, coconut oil, local combs, gum, scrunchies, and wrote me heartfelt letters and cards with any spare change they had taped inside.
Don’t get me wrong, teaching isn’t all smooth sailing; there are rough days when they are feeling particularly boisterous or when a lesson doesn’t go as well as planned. I was really trying to avoid the following statement due to its’ level of corniness, but the kids really do make it all worthwhile. I have gotten such beautiful letters from kids thanking me for being a good teacher and for smiling and laughing and leaving my friends and family to help them. I will never forget one day last week, right after the last bell of one of those days rang, and one of my freshman students skipped by singing, “Ms. Gill is the best teacher” after getting his “A” vocab quiz back. It is those comments, and when my students ask if they can read ahead in the book we are reading for class, or thank me for doing a game activity that I cling to get me through the difficult days.
Yesterday, I did a song activity with my freshman and sophomore classes where I played Jack Johnson’s “Better Together” and had them fill in some blanks I created and identify the subjects and actions in each line, which was the grammar lesson we had the previous day. It went beautifully. They couldn’t have been happier. They asked to hear it over and over again, and even the most unexpected students were singing aloud. Day by day I am learning what works and what doesn’t. I am even getting quicker at lesson planning and pulling less late-nighters.
Some events of particular importance have occurred during the last three weeks when I wasn’t lesson planning. For instance, I have eaten both turtle and dog. Turtle is delicious; I had it fried with local pepper after it had been boiled in coconut milk. Although with the turtle I also stomached a fair amount of guilt for ingesting a majestic creature, but what can you do? When in Pohnpei. As for the dog…well if you asked me three months ago if I would ever eat dog I would surely have declined. However, in a place where dog is the most prized meat and the fact that I routinely almost get attacked by the nothing-resembling-Lassie-K9’s, I wasn’t opposed to sinking my teeth into some much needed protein. That being said, there isn’t very much meat on dog ribs, and the taste is overwhelmingly meaty, so it didn’t quite make my tail wag. Too much? We have also been partaking in less controversial local foods such as breadfruit which Scott retrieves by skillfully shimming up the tree in our front yard, and the bananas he chops down from the back. I gotta say Pohnpei is like ever little kids dream: there are countless things to climb, food can be found outside, endless things to chop with a machede, and there are always new places to explore. Which leads me to the last weekend’s adventure in Nahlap. 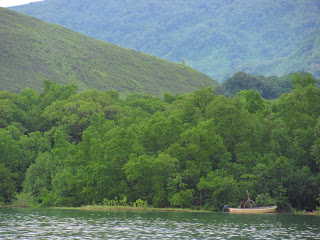 A short boat ride away out of Kitti is Nahlap, an island resort with one thing in mind: relaxation. Snorkeling and kayaking are also options on this island littered with hammocks and local houses. For 4 bucks Scott and I got a round trip and our own little sea-side hut to nap and read in. The day after our trip of relaxation, we got internet in our very own home! Alas, it shan’t be going another three weeks without a post- Scout’s honor!
Posted by Gabrielle Gill at 11:06 PM No comments: