Pink and Red on the Island of Green 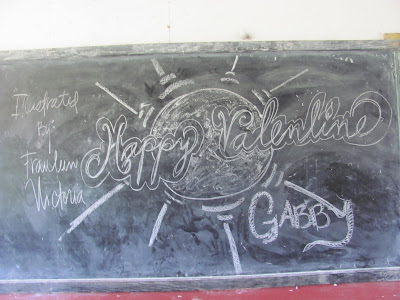 Obviously living on a relatively isolated island in the middle of the Pacific has taught me many things, some things expected, others not. Sadly, one thing I have learned is how much “the holiday spirit” relies on commercialism. Thanksgiving, Christmas, New Year’s and now Valentine’s Day, just haven’t been the same when everything isn’t decorated and when there aren’t marathons of holiday related movies on TV. Maybe a less cynical assumption would be that these holidays lack their usual spark because there isn’t the passion thriving in a community of believers; instead with each of these holidays there has been a feeling of “eh, yeah we’ve heard of it but don’t really get it” which results in only a handful of people really celebrating.  Refusing to accept that I could only feel the anticipation and exhilaration of these holidays when companies are spending, and making, billions of dollars a year to make me feel that way, I needed to take action for my own piece of mind.

So this 14th of February I decided to teach a lesson on the history of Valentine’s Day to explain why we celebrate it, even though it is not widely practiced in Pohnpei. I actually did not feel the “oh-man-I-am-forcing-them-to-become-American-guilt” with this lesson since the Science Club had decided to sell $1 dollar Valentine’s Day cards to raise money for a science fair and many students are familiar with the idea from movies they have seen. I was merely providing a little more substance to their concept of the holiday. I told them the legend of St. Valentine who was a martyr for marriage, standing up for what he believed in and facing the consequences rather than relinquishing his beliefs and living the rest of his days as a phony Roman. I talked about the enticement of secret marriages, Valentine being detained until his execution, and sending letters asking for prayer, signing them “Remember Your Valentine.” I thought I made a solid case for Valentine’s Day, and given the hopelessly romantic love letters and journal entries I have received this year I thought that my Pohnpeian students would be an easy audience. But when I gave them the supplies to make Valentine’s Day cards only some of them were as enthusiastic as I had envisioned.

Pin the wings on Cupid? Oh that they loved (I mean who wouldn't and frankly coming up with it may just be one of my greater accomplishments). They were even more eager about a race to see who could come up with the most words from the phrase “Remember Your Valentine” than they were about making Valentines.  As I was moping around looking at my disheveled classroom and watching students put my markers in their mouths after I have lectured them countless times on the way to handle materials, it suddenly hit me. Maybe Pohnpeians don’t really see the point in Valentine’s Day, because for them every day is Valentine’s Day.

In the Western world it is corny, cliché and just plain difficult for us to speak openly about our emotions. Maybe I have lived a sad existence, but in my experience when people do speak openly it’s usually as part of a wedding or following a tragic accident (well…that’s ironic), or the grand gesture in your favorite rom-com.  Rarely to people go around professing their love on a daily basis. That is, unless you live in Pohnpei.  My students, both male and female, are extremely in touch with their emotions.  There seems to be very little “loving from a far”- if you love (let’s be real, this is high school, have lust for is a better term) someone – they know about it, mostly likely because the boy showed up at your window at night, but there are other methods of communication as well. My students have written openly not only about romantic love, but about familial and friend relationships as well. They will tell you when they are embarrassed, ashamed, proud, confused: they will identify their emotions more thoroughly and more readily than any American I have ever met, especially one at their age. When I was their age I had two ways of expressing emotion, “I’m pissed” or “This is awesome.” It always felt too awkward to be too specific about emotions. 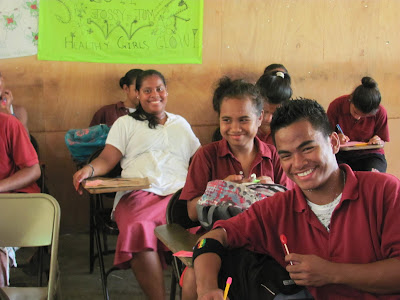 So Americans need this day, this one day out of the year where you are supposed to be open and honest and tell someone how much you love them, even then it’s still too scary for many of us. But here, where people where their hearts on their sleeve (short sleeves mind you), they don’t have a need for Valentine’s Day the way we do. Then there’s that whole commercialism thing, but let’s skip that discussionJ. After grasping the real situation I wasn’t as bummed about missing out on the real spirit of Valentine’s Day, because it’s around me every day. And plus, I get to live with an awesome American who understands how much it means to me, and made this one of the best Valentine’s Days I’ve had yet.
Posted by Gabrielle Gill at 10:10 PM